Misuse of Anti-Extremism Legislation in January 2012

Sova is aware of only one inappropriate anti-extremist criminal sentence handed down in January.

Prosecutors announced proceedings under Part 1 of Article 282 of the Criminal Code, incitement to hatred, over an Internet article titled Balkaria for the Balkars, and Moscow for them as well. It is Sova’s position that while the article contains hate speech against Balkars, it does not contain the inflammatory appeals necessary to qualify it for criminal prosecution.

January saw a sudden intensification of investigating cases initiated under Part 2 of Article 282.2, participation in an extremist organization, over membership in the banned (in our view, wrongly so) National Bolshevik Party. Thus, a Murmansk case initiated as far back as 2010 against Other Russia party activist Inna Marinina was brought to trial. We also became aware of another reopened case under the same article against Tatiana Kharlamova and Olga Komarova of the group of 13 who burst into the Foreign Ministry reception hall in Moscow in 2008.

Meanwhile, the European Court of Human Rights is investigating the 2009 conviction of Daria Isayeva, who was persecuted for membership in the National Bolshevik Party under Part 2 of Article 282.2; this is the first time Russia’s anti-extremism measures have been examined by the ECHR. As such, the Court has presented the Russian Federation with a series of questions about general legal issues present in Article 282.2, including:

- What level of involvement in the activities of a given organization is required for one to be considered “part” of the organization, under Article 282.2 of the Criminal Code?

- Does the given article explain clearly enough how the punishment is proportionate to the goal of the law, and strictly speaking, what is this goal?

Another incident in January deserves our attention: the release of Asylzhan Kelmuhambetov from prison. Kelmuhambetov was charged in June 2011 under Part 1 of Article 282.2, the organization of an extremist group, and sentenced to one and a half years in prison. The charge originated in allegations that he had set up a local cell of the banned organization Nurcular, and we find it to be inappropriate; whether or not Nurcular exists is itself a matter of controversy. Kelmuhambetov’s defense was able to achieve a change in punishment from imprisonment to a fine, which we see as a radical – and probably unique – instance of eased punishment for an “extremist” charge.

The Tomsk Prosecutor General’s Office appealed a local district court’s decision against classifying the book Bhagavad Gita. As it is. as extremist. It is Sova’s position that this absurd case should be closed as soon as possible for the attempt to ban the book is only based on blaming it for the assertion that one faith can be, and is, superior to another.

The State Duma adopted a draft federal law “On Amendments to Article 22.1 of the Federal Law On State Registration of Legal Entities and Individual Entrepreneurs, and Article 331 and 351.1 of the Labor Code of the Russian Federation.” The proposal stipulates banning individuals convicted of crimes against the “constitutional order” contained in Chapter 29 of the Criminal Code from working with minors. The ban now expands to most of the articles of the Criminal Code. Our concern is that the outcome of such a bill will contribute to discrimination of those wrongfully accused, which in turn would deal yet another blow to the legitimacy of Russia’s anti-extremism legislation.

Towards the end of the month, Ufa police seized an entire print run of leaflets published by the opposition movement Voice of Ufa, under the pretext of investigating extremism. The circulation included four different leaflets calling on residents to participate in “Vova, you’re fired” - a peaceful anti-Putin march on February 4. It is Sova’s position that this seizure was illegal inasmuch as such an investigation would require only a few copies of each leaflet, and not the entire print run.

The magazine Bolshoi Gorod reported that agents of the Interior Ministry’s anti-extremism branch, commonly known as “Center E,” and other federal agencies had questioned and collected information about some of the magazine’s readers. Bolshoi Gorod was behind an initiative calling on readers to demand prosecutorial investigations into the legality of some high-profile Russian cases, which probably explains Center E’s newfound interest. We see the police action as improper, as Center E clearly had no reason to assume Bolshoi Gorod or its readers were involved in illegal activity.

Earlier in January, the FSB presented prosecutors with materials alleging the discovery of an “illegal extremist cell” it claims has been extorting money out of the Muslim community at Moscow’s Lefortovo Market. 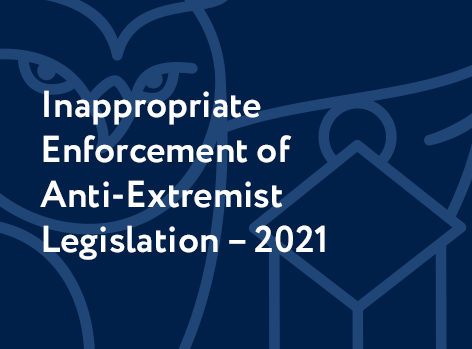